I’m turning 29 next month. All year folks have been telling me that this is an astrologically tumultuous time: Saturn returns! Whether that’s true or not, I’m using it as an excuse to ask friends and near-strangers all sorts of nosy questions about what their life was like at my age (even if they’re not very far from my age now!), and hopefully giving them an excuse for a few minutes of reflection. 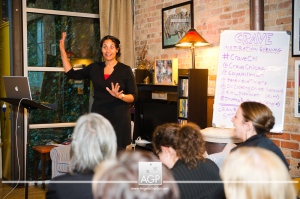 Today’s interview is with Saya Hillman, a superconnector in Chicago. I learned about Saya and Pete right before I moved to town a few weeks ago. I stepped out of my comfort zone and found a way to meet her right away – which makes sense because, as you’ll see, encouraging people to step outside their comfort zones is what she’s all about. If you’re in Chicago, you have until August 8 to enroll in her upcoming Fear Experiment, so be sure to check that out.

Julia: Does the term “Saturn returns” mean anything to you?

Saya: If you had asked me a year ago, my answer would’ve been “People unhappy with their cars returning them to the dealership?”  But after going to one of my favorite things to do in the city, Ignite Chicago, where ten-ish people get five minutes each to talk about whatever they want, and one of the presenters did her talk on Saturn Returns, I can now say Yes!, it means something to me.

J: Where were you when you turned 28?

S: I was three years into the best thing that ever happened to me — getting fired and subsequently becoming self-employed!

In 2004, at age 25, when I was let go, I was unsure what I wanted to do, I just knew I no longer wanted “Boss” to be a part of my vocabulary.  I made a list of all the things, regardless of how silly they sounded, I wished I could get paid to do.  They’re now all part of my professional life today via my company Mac ‘n Cheese Productions, which is about to celebrate its eighth birthday.

That list-making experience and its subsequent success molded the philosophy I’ve adopted for my approach to life: you can make your passions the foundations and fuel of friendships, romance, work, everything, and I now live a Live of Yes! and help others live similarly.

J: What are one or two or three things you remember from the year or so surrounding that birthday?

S: After four years in a wonderful apartment in my favorite neighborhood in Chicago, Roscoe Village, I felt the pressure of “becoming an adult” and following the path that many of my friends were going down, which at that time was home-ownership.  Unfortunately, I could afford a cardboard box in a Roscoe Village alley; so I moved to a neighborhood that was farther from “hipness” and “safety,” Albany Park, where I could get a lot more for my money, to try it out for a year and see if I wanted to buy.  I missed Roscoe Village immensely and at age 28, decided that I’d rather rent in a community I loved than own in a community that didn’t have everything I wanted (my housing criteria list).  I moved back to RV and have been here for four years.  And as things tend to do when living a Life of Yes!, everything has worked out magnificently.  I found a space that has opened door after door for me, in its event-friendly structure, allowing me to do underground supper clubs, comedy nights, yoga classes, film screenings, dance rehearsal…

I didn’t know when I was 28 that workshifting was going to be a goal of mine, but traveling to other cities for a few months at a time with Fiance to do Mac ‘n Cheese Productions and TeamPete offerings is high on the priority list, and renting makes that lifestyle much easier.  I’m really glad I tried something out, decided it wasn’t for me, and gained clarification on what was important for me.  And that I realized it’s ok to not follow the herd!  So many of my friends who bought homes now regret that decision.

J: Do you feel close to those memories, or far from them?

S: At age 33, I feel very far from being twenty-eight.

So much has happened since then, from re-focusing my services (from video production and teaching digital media to low-income students to creating opportunities for people to live fuller lives) to travel (Rwanda, Amsterdam, Belgium, Paris, the South) to finding my best friend who is now my Fiance (through one of my own events!) to interacting with the world in a different way (less complaining and worrying, more doing and appreciating).

Also, I no longer view my life in segments.  When I was a 9 to 5’er, I had a professional life, social life, romantic life, spiritual life.  Now I just have a life.  Days of the week, time of day, my age — they don’t really mean anything to me anymore.  I think that adds to the feeling that 28 was a long time ago.

J: Do you have any advice for someone going through this (supposedly) astrologically tumultuous time?

S: Experience life solo.  Don’t be afraid to go to something just because you couldn’t find someone to go with you.  I began The Solo Life in 2009, where I would go to something once a week or so by myself, from literary readings to movies to concerts to parties.  So many wonderful things came out of this!

J: What are some fun or meaningful activities that helped you live that Solo Life, or some blogs, websites, or other tools that can help folks live a life of Yes?

S: So glad you asked!

1. GrubwithUs: eating at a restaurant with people you don’t know
2. Get Mortified: people read from their childhood diaries
3. Me So Far: dating resource that doesn’t feel like a dating resource!
4. Fear Experiment (disclaimer, this is my own program!): Strangers learning dance, improv, stepping, or a capella and then performing in front of 700+.

Thanks, Saya, for playing along with this series and for creating spaces where Chicago newbies and veterans alike can get together and say Yes!

Photos: The image of Saya Hillman is by Angela Garbot via Mac ‘N Cheese Productions;  I took the “Hell, yes!” photo in NYC in 2009.